A sociable run tonight. It started with me doing a less than glamorous Superman-style change in the ladies at Morrisons. The middle part was like Bambi on ice. And it finished up with me sitting in my car trying to take a photo of my rapidly defrosting fringe. Unfortunately all I ended up with was a photo of my steering wheel. 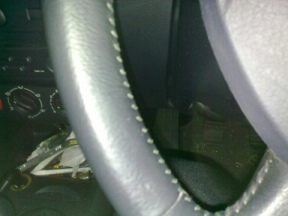 After last week’s sociable run I complained that I was too warm in my jacket, but there were no such complaints this week. We’re cloaked in thick freezing fog, which has not been fun to drive in, and it’s started to become slippery underfoot. My companion had planned a route for us, but given the conditions I offered to cut it short only to be told “no, you’ve got to run”. Sometimes I regret confessing that I’m doing Janathon. We soon realised that it didn’t really matter where we ran because we could only see a few hundred metres, making the landscape pretty irrelevant.

The best bit of tonight’s freezing run was coming home to a big chicken casserole that Ginge had adapted from a Jamie Oliver recipe (It was supposed to be hunter’s stew, but he’d renamed it “Runner’s Stew”) – gorgeous. I’m very lucky that he is tolerant of my daft follies (Cake of Good Hope’s Janatholism symptoms sound very familiar) and doesn’t mind picking up more slack than usual when it comes to my house work efforts (maybe I should do a domestic version of the Athons – cleaning and blogging every day in February? Sounds rubbish). He has also spotted some cows whilst out running and has been scouting out interesting off road routes for us to tackle together (the lengths that he’ll go to actually see me). So…THANK YOU GINGE!