My plan for Janathon was that Mini-Ginge and I would get out for a daily walk. Our good intentions didn’t even last the first day. The weather was terrible, himself was being a hungry boy and we both agreed that it was a much better idea to stay in and have a brew with his gran.

Hels had set a Janathon challenge of doing a pyjama plank and whilst I happily volunteered to do the PJ wearing, I’m still banned from some abdominal exercises so I can’t plank (because I would have been planking daily if I was allowed. Honest.). The ban (along with high impact exercise) was imposed by the lovely physio that I’m seeing regarding the after effects of Mini-Ginge’s arrival. With all of Dr Big Hands’ messing around, my pelvic floor is not quite as well laid as it was previously. The result of this is that I’m now a very loud cheerleader for pelvic floor exercises and was referred to a post-natal exercise group for core stability.

The first group was a few weeks ago and I have been practising my exercises religiously since then. Oh hang on, I haven’t actually done them since the last session. Ooops. So day one of Janathon has been a set of my physio exercises just so I can hold my head slightly higher when I go to the class tomorrow.

Oh, and just to keep Hels happy, I donned my foxy pyjamas specially for the occasion. 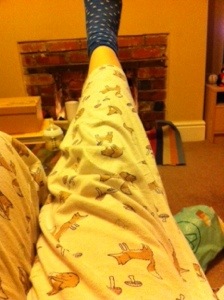 4 thoughts on “Janathon day one: Plan? What plan?”