Alright, I’ll admit it, one of the reasons that I didn’t practise my physio exercises was that I was a bit cocky. “This is just like dead easy yoga” I said to myself, “this will be a walk in the park” said I. Ha. And double ha. At today’s class I moved up to Level Two and I was rubbish. Some exercises I was fine with, but trying to do a clam with my bottom leg raised off the floor? No chance. I was wobbling like a jelly on a seesaw.

Once I recovered from the embarrassment of being caught trying to look better at it than I actually was, I swore blind that this time I will practise them before the next class (23rd January if anyone wants to nag).

After the class, Ginge and I took the mini one for a walk round the lodge, stopping to get a bit of lunch before we headed home. At this point I made the rash decision to go back up the short steep hill rather than the long, slow hill. Now, I can’t actually run this hill at the best of times and judging by my inability to push a pram up it without going extremely red in the face, I won’t be running it any time soon. On the plus side, Mini-Ginge and I have found our hill training (he slept through it despite the bumpy pavement and the sound of his mother wheezing). With an added loop from walking to baby clinic, this was a good three miles and is likely to be one of our regular Janathon walks (I apologise now for the repetitive bird photos). 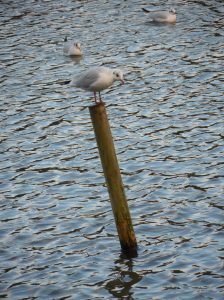