Sometimes I resent giving up weekend time to go for a run, but it’s worth it just to run in actual daylight. Today this meant a three mile loop down the lodge and back up the big hill that I’m trying to conquer. I saw more people than I had all week (mostly dog walkers, mostly with improbably small dogs), I did lots of smiling and even became an unwitting part of a mad-eyed collie’s training who was firmly taught “sit” and “leave” as I scooted past. Whilst I didn’t conquer the hill, I ran further up it than last week before giving in to my burning lungs. Annoyingly though, my overall pace was slower than last week. 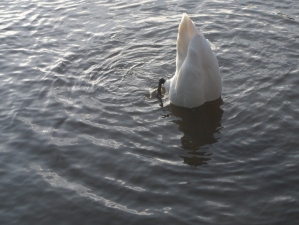 It turns out that I’m not the only one who enjoys smiling at strangers. With her permission (and the promise of payment, possibly in the form of contraband baked goods) I’d like to share my only guest blogger’s view on the subject:

Incidentally re: grinning at passers-by while engaging in extreme sports and dangerous pastimes, I frequently try this while cycling.

I have now come to the conclusion that the usual grin back is due to the bizarreness of an elderly woman* wearing inappropriate clothing wobbling** on a bicycle.

I think you’re very brave venturing out when the rest of us a snuggled in thinking I wouldn’t send a dog out in this.

What dogs have done to be sent out I wonder, but it’s a lot harder to send a cat out.

I didn’t visit a random blog yesterday, but am doing two today – Ross is the first of them.