Another day stuck in a stuffy office (we’ve been allowed to open the windows beyond the safety catch as long as we all promise not to make a break for freedom) so I was keen for a bit of fresh air at the end of the day.

Ginge was booked in for a haircut, so I cadged a lift into town and went for a walk in the park while he got himself shorn.

To be honest I felt a little bit daft marching around the place, a strange mix of aimless and purposeful, and more self-conscious than I ever do when I’m out running.

I think the signs were left over from trail race that had been held the previous night, even if they weren’t, there was no chance of anyone mistaking me for a runner tonight. 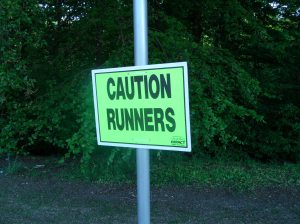 I hoped that this wasn’t missing from one of the runners.

This weekend the town is holding its first carnival in donkey’s years and the setting up has started in the park.

Walking past the tents brought back a jumble of memories of childhood trips to shows and craft fairs, as well as a few of lurking round another local festival as a teenager…

Past the helter-skelter to the lake where the cygnets have hatched (apparently four from ten eggs so the local swan hobbyists inform me). 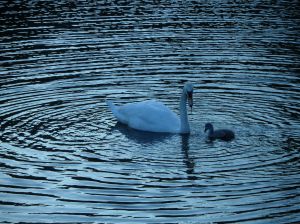 There’s a bit of concern that the carnival (and related cavorting) might disturb the young family so I hope that they’re all safe and sound next week.