Loosely speaking there is a system to my running plans. In winter, morning runs are usually three miles (because I can’t get up any earlier to squeeze in more), evenings vary by inclination, company and weather, weekends I try to get a longer, daylight run in. This has not changed during Janathon. My plan on January the first was to gradually increase my longer run (it had been ages since I’d done more than even five miles) up to six, seven, eight and finally nine miles by the end of the month. The weather has scuppered me slightly, but this weekend eight miles was on the cards.

Last night I got the maps out to do some plotting – I’m off work today so I could try a new route and we’re away tomorrow so I wanted to fathom out a route in unfamiliar territory. What I came up with was a mash-up of two routes that I absolutely hate. A six-miler that avoids most of the scenic and rural areas of the locality, and a ten-miler that always sees me grizzling and that I have only vaguely enjoyed once.

It’s somewhat chilly today (demonstrated by the fact that my gloves stayed on for the entire distance instead of being shoved in my back pocket after a mile) and the wind was bitter. As I set off, an occasional flake of snow would flutter and dance in front of me warning of weather yet to come. 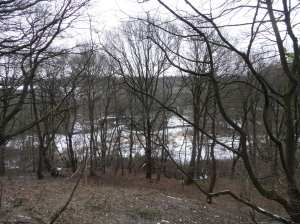 All my photos are incredibly bleak mid-wintery.

To be honest, most of the run was bleak mid-wintery. 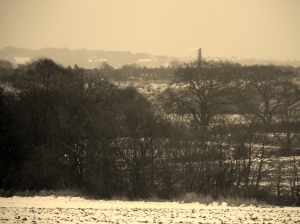 And then I saw a flash of red in the hedgerow.

And had one of those moments where I felt glad to be outside and seeing things that I wouldn’t see from the warmth of my car. 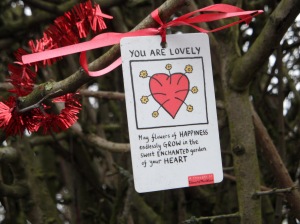 And then the forecasted light snow started around mile six and I was glad to get home for a brew.