It wasn’t that I was tempted to tumble off the Athon wagon today. It would be more accurate to say that I was tempted to do a great big high dive with triple somersaults off the Athon wagon. Apparently I’m not allowed to do that though. I could have just done the miserable route back from the supermarket, but there is one piece of treasure that I wanted to tick off before we head down south.

For this reason (and I hope that Fortnight Flo appreciates it) Ginge dropped me off near the milestone and I had to run the two point something miles back home (inevitably this would be rounded up to a nice tidy three…).

Quite fancy for these parts.

Ginge’s eagle eyes came in use again as he had spotted a deceased hedgehog at the side of the road. Thank you, @torsparkles for turning me into someone who takes photos of roadkill… 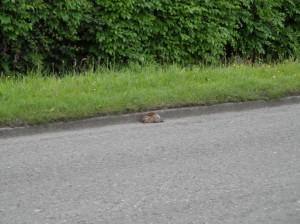 I also spotted a postie’s red elastic band, which isn’t actually on the list but I took a photo of it for my mum because she says you don’t often see them any more.

Rarely seen round our way – one of the local councillors is waging a war on rubber bands. I am waiting for Mr Clegg to nick the idea to suggest as a government strategy.