So, what have I learned from Juneathon 2012?

If you’re going to do a daft running challenge that is hard enough to complete at the best of times, it sometimes helps if you add in a further layer of madness just for the giggles.
If I’m completely honest, I was a bit apprehensive about my seventh Athon. It gets a bit tedious running every day, especially when morning runs force you to run the same routes, and if it’s tedious for me running then it must be a bit tedious for any poor soul who choses to read about it. Doing my treasure hunt made me see my runs differently, familiar routes became more interesting because I was on the lookout for things and I was seeing my surroundings through slightly fresh eyes. Even if those eyes were looking for roadkill and interestingly shaped sticks. Basically…

Treasure hunts are ace
That’s it. Everyone should do more treasure hunts. I don’t care how, make it happen.

At times I can get a bit obsessive about things
Ginge will testify to this. I think I realised that things had peaked when I was trying to see a fire engine, but was failing miserably. When I was young, the fire brigade would turn up to school fairs with an appliance and Welephant in tow so I thought I’d try to find an appliance by having a look at their twitter feed. I didn’t find any suitable events, but there was a cat stuck in a cavity wall mid-month. I’d love to say that this was me at my worst. It wasn’t. That would have been when I checked their feed, saw that there had been an early morning incident in the next village and found myself ruing the fact that I hadn’t been out for a run at 2.30…

If you do something every day for a month it becomes a habit
Alright, so google tells me that it’s actually two months, but after 30 days of looking for stuff, I can’t get out of the habit of crossing things off the list. Which is why, if you go running with me and we pass a cat, I will mutter ‘cat’ under my breath. See also ‘pink car’, ‘baby swan’ and ‘bloody fire engine’.

Southerners trust people to pay for eggs
When I was running close to home, I regularly spotted signs advertising eggs, but no one leaves the eggs out on a stall with an honesty box. I’m not sure what this says.

It always helps if you have a willing volunteer to join you on these escapades
Thanks Ginge!

Sometimes you have to let the fates take matters into their own hands
If we hadn’t had tent issues on day 22, I would have carried on trying to run every day on holiday. I’ve done this before and it’s ok, but missing a day’s run and walking instead gave me permission to walk on other days as well, thus freeing me up to relax and enjoy myself.

Everyone needs to do a dressing gown dash
Preferably in Cathy and Shaun‘s back garden. In fact, I propose that during the next Athon we all conspire to do some kind of mass flashmob arrangement round  at their’s. In matching dressing gowns. That’d surprise them.

If you ask people to suggest ideas for a treasure hunt, they will range from the sublime to the ridiculous
In the thirty days, I spotted (albeit loosely in some cases) 76 out of 80 items of treasure. I didn’t locate:
A thunderstorm – I’ll admit that, while were camping, I was a bit relieved about this. Sorry Morning of Magicians.
Dr Who with an iguana – Nope. Even googling for all the Doctors with an iguana didn’t come up trumps (and I had high hopes for Peter Davison what with him being a vet and everything). Sorry Cathy.
A Manchester tart – I would have loved to have found one of these, I made one for Ginge’s birthday last year and they’re rather nice. I thought that I might be onto something in a Kentish butchers because they sold gypsy tarts and Eccles cakes, but there was no time to implement a selective breeding plan and create a custardy offspring from the two. Sorry Adele. And Ginge.
A giant rabbit (preferably wearing a bow tie and/or a top hat) – I did have the opportunity to clock one of these whilst watching the South Sydney Rabbitohs on telly on July 1st, however it was too late and a bit too terrifying. Sorry Karen. 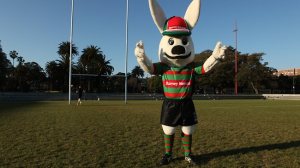 Giant rabbit: malevonent
(Photo by Adam Knott via The Australian)

So that’s what I’ve learned from Juneathon 2012. It’s been bloody lovely, thank you all (especially Cathy/JogBlog/Queen of the Athons without whom we wouldn’t get sucked into this ridiculousness).

On the final day of Juneathon I decided to do a loop around the campsite without being able to remember how long a loop it was. Turns out that it was shorter than if I’d done the out and back that I first thought of. So I added a bit on and made it 3 miles.

…but there at the side of the tent was the bloody Ark of the Covenant*!

*May not be the real actual Ark of the Covenant**

I hope you all appreciate the anxieties I’ve been overcoming so that I can find all this treasure. I’ve become fairly shameless at photographing people’s property, things in bins and knickers in hedges. Today however was an entirely different kettle of fish. I know I’m not alone in feeling panicky when it comes to walking or running through farmers’ fields, even when then there’s a footpath – I suspect it’s the knowledge that you’re at risk of annoying a man who is likely to have a shotgun license.

Today was my fault. Kind of. When I saw that trig point had been added to the list, I had to do a bit of research to find out (a) what they are and (b) where I might find one. I learned that they come in different shapes and sizes, they tend to be up hills and it appears that there are people who go round photographing them as a hobby. I quite like that we live in a world with people who do things like that, partly because it makes me feel better about doing all this palaver.

Having identified one not too far away (and convenient for another bit of treasure), I printed off a map, which somehow has survived the journey down and a week in the tent. We navigated our way to a probable field by applying my OS map reading knowledge, skills (and I use the term loosely) that have been untouched since second year geography. Decades have passed since then, so I was quite proud of being able to use landmarks to navigate us to where the thing should be. After quite a lot of tramping, we deduced that we were in the wrong field and should have been in the one next door.

Unfortunately we couldn’t see a way into the next field, so off we went looking, determined that there had to be a way in. Way in located, we set off round the edge of the field, fighting the temptation to say sod it all the way. Just as we were about to give up, old eagle eyes spotted something on the horizon. There it was in all its concrete glory.

This does not do any justice to the amount of back and forth toing and froing that was involved in finding the bloody thing. I took Miles with us and all together we clocked up a 3 mile walk. With hindsight, I reckon that around 2 of these were done whilst traipsing fruitlessly through fields…

After all this excitement we went hunting for rhino and were rewarded with a glimpse through the leaves.

Finally, we took advantage of being up a big hill in order to admire the scenery from a viewpoint overlooking fields and sea.

And after all that, we just have one more day to go!

Several people had the same idea of a geocache as a suggestion for my treasure list. I’ve seen lots of people tweeting about looking for them, but was a bit clueless about what it actually involved. Basically, people hide treasure in the form of caches and then other people locate them using GPS and clues (and I suspect a bit of luck), the finder then logs their find in the cache and/or the Geocaching website.

Sometimes the caches contain bits and bobs that the finders leave for other people to take in exchange for something else to be left. We tried to find one right on the doorstep of the campsite, but failed miserably (in part because we had no idea what we were looking for) and so carried on to the next one on our list where we had way more success!

It’s fair to say that I was stupidly excited to find it.

We turned round and hoofed it back, both of us feeling like we’d started the run from scratch and grateful that we’d run before it became too hot.

At the end of the three miles, we also ticked off a roadside egg stall with a beautiful handwritten sign.

Somehow, yesterday, I twanged my back. I’m not sure if this was because of the air mattress, poor adherence to moving and handling training, or climbing trees when I’m old enough to know better. Whatever the cause, I spent most of the day listing to the right, creaking and swearing under my breath.

In light of this, today’s Juneathon activity turned into ‘lots of walking around London village’ as we headed up to the big smoke on one of those fancy high speed trains, treasure hunting as we went.

From St Pancras the first stop was always going to be I Knit London near Waterloo. It is full of woolly goodness and I left with a bagful of unknitted dreams… By the time I had finished stroking every skein in the shop, it was dinnertime. I considered sacrificing myself for the sake of Juneathon treasure by managing a half eaten Greggs, but luckily someone else had taken the bullet for me. 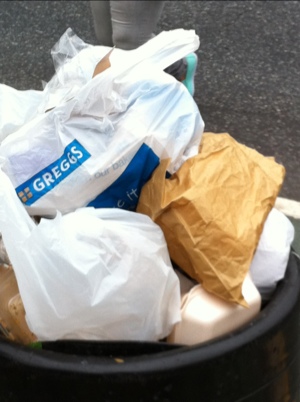 This freed me up to have some rather lovely jerk chicken with rice and peas, while Ginge enjoyed a helping of curry goat*… 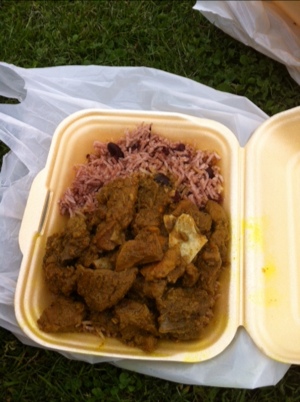 From Waterloo, it was back into the tourist fray of Trafalgar Square where I shrieked ‘MONSTER!’ and scampered off to see this fine example of street furniture that looks like a face. There is a nice symmetry to this because he was knitted by the marvellous Deadly Knitshade who suggested this piece of treasure in the first place.

We also bagged a unicorn…

…a chalk drawing on a pavement… 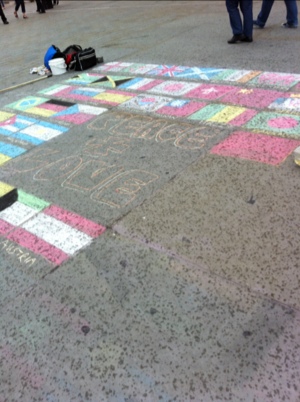 …and a view through an archway while we were there.

Down at Covent Garden, I considered trying a new look with a bit of glitter…

…but decided to steady myself from these thoughts by looking at cake instead. 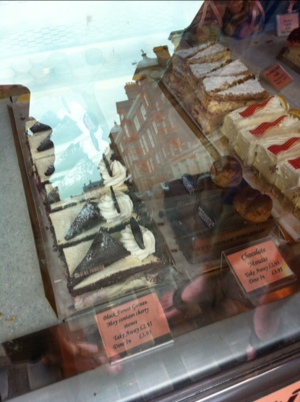 While we were window shopping we also spotted a penny.

It wouldn’t be a trip to London without venturing down to the Thames and conveniently this also allowed us to tick riverboats off the list.

So that’s another ten pieces of treasure with just three days of Juneathon to go.

*I would like to point out that I would have much preferred to see my goat in a livelier, more bleatingly animated form, but the little buggers have kept evading me throughout the month.