Yesterday I was out toasting Her Maj and my nutritional intake for the day was mostly in the form of malt, hops and barley. By some miracle, I was spared from a hangover but did become the  Very Hungry Caterpillar in human form. As such today’s Juneathon effort was a paltry token mile because I wanted to get home to the lasagne that was in the oven (since devoured and now I’m ravenous again).

I also thought that I better tick off Union Jack (suggested by Adele and Jen, hopefully the third one covers ‘in an unusual place’!) before this weekend is over (the first two are from my run today and the other one was from the Olympic torch celebrations on Friday).

Flying the flags through the village 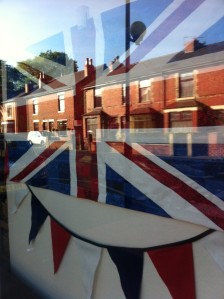