Tonight was a social run along my home stretch of the Leeds-Liverpool canal. Since I started my plan to run its length, I’ve not really been out along this section Even though it’s lovely, repeating the same stretch doesn’t get the miles covered and so (just like running without your Garmin) doesn’t count…. However, my friend the Running Bully (who got me into this whole running lark in the first place) and I have just resumed our weekly Thursday nights and the canal is a far more scenic route than the normal town centres we plod round in the winter.

Being stuck in the office all afternoon, I hadn’t noticed the day changing from overcast gloom to bright blue skies and after a quick change in the ladies, I was haring down the motorway towards the towpath ready to enjoy the sunshine.

On the way, we saw some cows.

The Horse Bridge was inhabited by this fellow.

There was an assortment of waterfowl, but these chaps were the best. 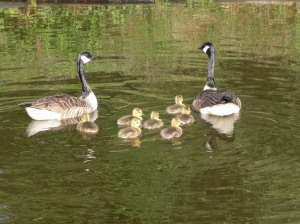 And then we turned round and came back again. On the way back, the Bridge Horse had multiplied… 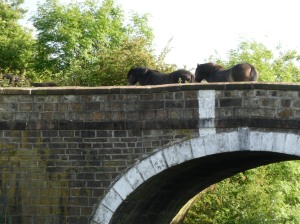 And then there were two (well actually three, the third is hiding)

We had some shouted encouragement from an Australian man on a narrowboat, who was drying his shirts on hangers in the hedgerow (luckily his pants were on a maiden, not a branch). His is not a boat that is usually moored there, so I wanted to stop and ask where he had been and where he was going, but I think that would have raised eyebrows with my companion (so hello Aussie Mossie if you’re reading!).

Next up was an older gentleman who well-tanned and stripped to the waist whilst operating a lock. The odd thing was, he didn’t actually have a boat. Now, I’ve read enough information notices on the towpath to know that operating locks willynilly is A Bad Thing (it wastes a massive amount of water), so I’m not sure what he was up to. There was another bloke taking photos with a proper camera, so maybe British Waterways are doing some kind of topless calendar. Hmmmm.

And that was about it (apart from running through a stand-off between a cat and two collies), 3.5 miles done.