For starters, this Juneathon episode has me slightly twitchy because I have a standard format for my Juneathon post titles and a standard format for my canal running post titles. Today I have had to combine the two and I’m not convinced that it works as a title. Clunkiness aside, today was a good day. I had been out for lunch with my running friend (feeling slightly weird that I wasn’t wearing any kind of lycra or wicking fabrics) and had fuelled up on quiche (we both stared longingly at the pudding menu but resisted temptation) before going home and collecting Ginge for a drive out into the countryside and a spot of canal running.

We’ve been concentrating on going out eastwards towards Yorkshire, but we’re past day trips for that side now (we’ve got a few canal camping trips planned to get those done) so it’s back to West Lancashire to pick up where we left off in the sunshine at Bridge 28. Today was much more of a grey day, though it had stopped raining by the time we set off.

The pub that we parked in had this in the beer garden. I think that it’s some kind of children’s plaything, possibly that’s been retrieved from a Communist state during the Cold War.

Just yards after setting off, I pulled off one of my sudden stops that normally cause Ginge to nearly fall in the canal – it was well worth it to tiptoe past these sleeping ducks.

The ducks were rapidly followed up by these chaps – nearly but not quite grown up coots (the waterfowl theme continues later in an oh so cute kind of way).

As we were doing a there and back run, I didn’t take many photos on the way out and it gave us chance to get a nice pace going (stopping to take photos doesn’t help in getting into a rhythm) and soon enough we were at the halfway point (after a mild bit of heckling from a group of lads in a beer garden, who then thanked us politely as we stood to one side to let them pass on their bikes a few minutes later. Pah. 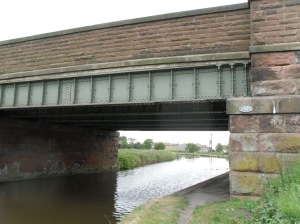 Bridge 21A - the turnaround point

There were lots of moorings along this stretch, but I think these were the two most interesting. Thor and The Pride of Sefton, the latter is is a barge converted to make the canal accessible for people with disabilities. 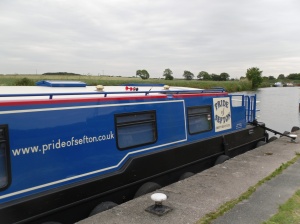 The Pride of Sefton

This area is still very agricultural and there probably hasn’t been that many changes over the years. For canal runners, the best thing about this is that there are few new bridges (and so there are few annoying As, Bs or anything elses between the round numbers), this combined with their even spacing and the canal’s straight route meant that the miles ticked quickly by. 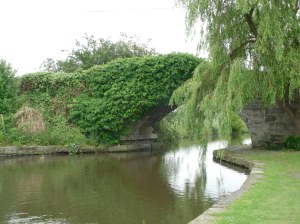 The nicest bridge of the run

We passed this plaque marking the place where the building of the Leeds & Liverpool canal formally began and this is marked with an information board and sculpture just after.

Marking a little bit of history 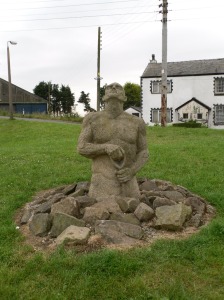 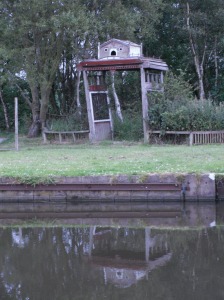 A room with a view

And I realised just how close we are to the Liverpool end of this escapade.