As this is mostly a running blog and I’m still not running, I’ve been a bit stumped for things to write about. I had a good think about it and realised that I definitely can’t carry off the yummy mummy blogger schtick (though I can probably pull it off more convincingly in writing than in person). It doesn’t help that I hit a slightly grey patch in my head, where I found it difficult to think about me doing ‘me things’ ever again and anything I wrote in that time would have been quite a miserable read.

To be honest, I still haven’t got anything to write about (when did I ever?) but I feel like I’ve reached the point of a new start. It’s a bit like New Year’s Day but without the hangover, sense of obligation and Special K adverts on the telly. I have been dreaming of running (much easier than actually doing it) and have just filled my iPod with gym songs (it was still full of chilled out Now That’s What I Call Labour tunes from back in October).  I’m also trying to get to grips with improving my diet – mainly so that I can avoid or at least reduce the trauma of any return to work shopping trips that I’ll have to endure. So I think that’s what I’ll be going on about for a bit. Either that or it’ll just be photos of ducks again. 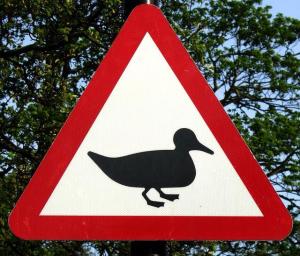