My magic training plan had me down for an easy hour and ten minutes on Sunday. However Sunday was the day of the sell-out Wigan 10k and I had a place booked on the start line. I was kind of ok with the idea of using the race as a training run with a medal but… oh, who am I trying to kid? I wanted to run the race as a race and try to improve on July’s Manchester 10k time. So I asked the chief training plan sorcerer and with his blessing, shifted my threshold run forward a day and went for it on Sunday.

All the running wisdom out there tells you to make sure you have a good night’s sleep before a big race. I have yet to find a book or a blog or anything that recommends being up at 1 o’clock feeding Calpol to a grizzly child. This is because it is a rubbish idea and only an idiot would recommend it. I am an idiot and even I do not recommend it.

Luckily the race had a 10am start, although Mini-Ginge had  other ideas and I was up ridiculously early, trying (and failing) to guard my breakfast from a small porridge thief. God bless toddlers and their approach of “what’s yours is mine and what’s mine’s me own”. So, with most of my porridge scoffed by me, my timing chip carefully looped through my laces, my number clipped to my #bloodnotmoney vest and Tim strapped to my wrist, we set off f’t Wigan.

At nearly 3500 runners, this was one of the biggest races I’ve done for a while and the race organisers had gone all out with live music, outdoor bars, massage tables and a whole European food market in the town centre. After queueing for the loo, I parked myself somewhere between the 65 and 70 minute pacers, hopeful for the former but not ruling out being nearer the latter. Away I went, running comfortably, occasionally glancing at Tim and being alternately pleased and terrified by the pace he was showing. I have to confess that my glorious feeling of “I could run forever!” was probably helped by the steady downhill of the first mile and a bit.

It was also helped by the amazing support of Wiganers. All around the route, people were out of their houses to cheer us on, children were banging pots and pans (I overheard one weary mum tell her daughters “not all of the time” as they emerged from the house with the contents of the kitchen cupboards) and on the return leg, two girls were offering glasses of water. It was brilliant – I think Autumn sums it up perfectly in her race report, describing it as being “like a mini London Marathon but with more space to run and a lot more smiles”.

On the only section without many cheering crowds (around the DW stadium) there was a steel band AND a brass band (it’s official, any run of 5 miles or more, I want my own band, or at the very least a trombonist to follow me round). I love a band during a race, it makes me ridiculously happy and you can always see a spike in my pace when I pass one.

I knew that what went down, must come up and the return uphill leg was certainly my slowest mile, but I did surprise myself by plodding all the way to the top without walking. After this, there was another bit of an uphill into Mesnes Park and then a slightly frustrating but brilliant for being cheered zigzag back and forth around all of the paths of the park. At this point I realised that I have become one of those people who high-fives small children sticking out their hands (at one point I nearly high-fived a marshal before realising just in time that he was just pointing the way). I also got a personal cheer from my own support crew, which always puts a spring in my step.

Coming up to the finish, I tried to put a bit more effort in (not that you can tell from the official photos) only to be suddenly confused by someone shouting my name. There at the finish was my friend and her bloke (who had run the race a good ten minutes faster than I had) cheering me on. I looked up at the clock and was gutted to see my time as being slower than at Manchester, I was certain that I’d run way better than that. God bless chip timing though – by the time I had collected my medal, goodie bag, banana and water, my phone had binged to tell me that my chip time was 1.03.25. My fastest 10k time since having Mini-Ginge! I genuinely hadn’t realised how far back I had been and how long it had taken me to cross the line. 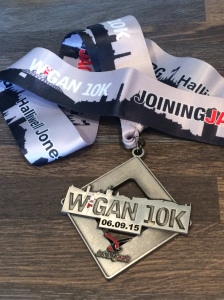 Would I recommend the Wigan 10k to a friend? Definitely, in fact I already have. The race was brilliantly organised, hugely well supported and blessed with perfect weather – I absolutely loved it and will definitely be back next year.