My magic training plan had me down for an easy hour and ten minutes on Sunday. However Sunday was the day of the sell-out Wigan 10k and I had a place booked on the start line. I was kind of ok with the idea of using the race as a training run with a medal but… oh, who am I trying to kid? I wanted to run the race as a race and try to improve on July’s Manchester 10k time. So I asked the chief training plan sorcerer and with his blessing, shifted my threshold run forward a day and went for it on Sunday.

All the running wisdom out there tells you to make sure you have a good night’s sleep before a big race. I have yet to find a book or a blog or anything that recommends being up at 1 o’clock feeding Calpol to a grizzly child. This is because it is a rubbish idea and only an idiot would recommend it. I am an idiot and even I do not recommend it.

Luckily the race had a 10am start, although Mini-Ginge had  other ideas and I was up ridiculously early, trying (and failing) to guard my breakfast from a small porridge thief. God bless toddlers and their approach of “what’s yours is mine and what’s mine’s me own”. So, with most of my porridge scoffed by me, my timing chip carefully looped through my laces, my number clipped to my #bloodnotmoney vest and Tim strapped to my wrist, we set off f’t Wigan. 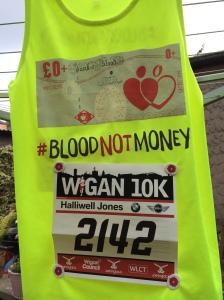 At nearly 3500 runners, this was one of the biggest races I’ve done for a while and the race organisers had gone all out with live music, outdoor bars, massage tables and a whole European food market in the town centre. After queueing for the loo, I parked myself somewhere between the 65 and 70 minute pacers, hopeful for the former but not ruling out being nearer the latter. Away I went, running comfortably, occasionally glancing at Tim and being alternately pleased and terrified by the pace he was showing. I have to confess that my glorious feeling of “I could run forever!” was probably helped by the steady downhill of the first mile and a bit.

It was also helped by the amazing support of Wiganers. All around the route, people were out of their houses to cheer us on, children were banging pots and pans (I overheard one weary mum tell her daughters “not all of the time” as they emerged from the house with the contents of the kitchen cupboards) and on the return leg, two girls were offering glasses of water. It was brilliant – I think Autumn sums it up perfectly in her race report, describing it as being “like a mini London Marathon but with more space to run and a lot more smiles”.

On the only section without many cheering crowds (around the DW stadium) there was a steel band AND a brass band (it’s official, any run of 5 miles or more, I want my own band, or at the very least a trombonist to follow me round). I love a band during a race, it makes me ridiculously happy and you can always see a spike in my pace when I pass one.

I knew that what went down, must come up and the return uphill leg was certainly my slowest mile, but I did surprise myself by plodding all the way to the top without walking. After this, there was another bit of an uphill into Mesnes Park and then a slightly frustrating but brilliant for being cheered zigzag back and forth around all of the paths of the park. At this point I realised that I have become one of those people who high-fives small children sticking out their hands (at one point I nearly high-fived a marshal before realising just in time that he was just pointing the way). I also got a personal cheer from my own support crew, which always puts a spring in my step. 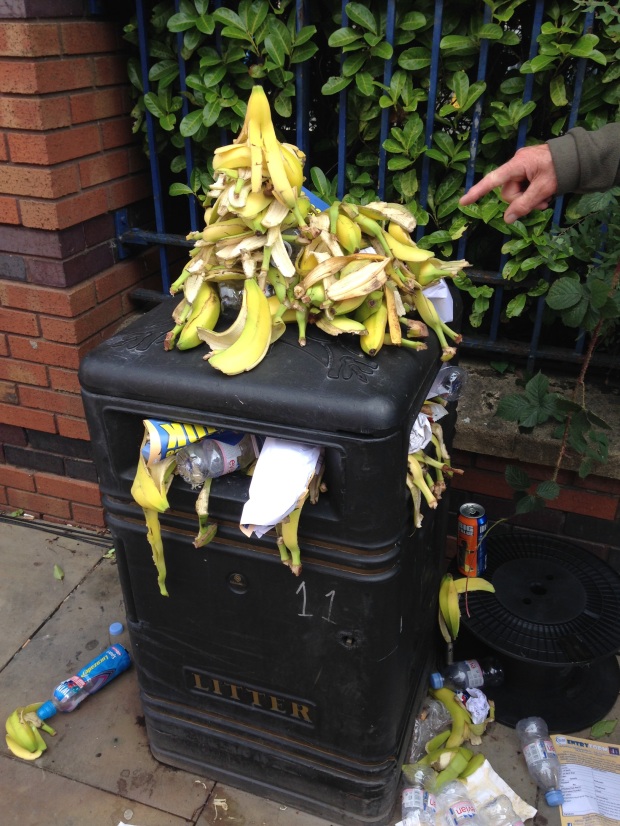 Coming up to the finish, I tried to put a bit more effort in (not that you can tell from the official photos) only to be suddenly confused by someone shouting my name. There at the finish was my friend and her bloke (who had run the race a good ten minutes faster than I had) cheering me on. I looked up at the clock and was gutted to see my time as being slower than at Manchester, I was certain that I’d run way better than that. God bless chip timing though – by the time I had collected my medal, goodie bag, banana and water, my phone had binged to tell me that my chip time was 1.03.25. My fastest 10k time since having Mini-Ginge! I genuinely hadn’t realised how far back I had been and how long it had taken me to cross the line.

Would I recommend the Wigan 10k to a friend? Definitely, in fact I already have. The race was brilliantly organised, hugely well supported and blessed with perfect weather – I absolutely loved it and will definitely be back next year.

Does anyone read this for up to the minute news about what I’m up to? I really hope not.

Not last Sunday, but the Sunday before was the first ever Port Sunlight 10k and I ran it. Not only did I run it, I was proper looking I think it was a combination of the fact that it was a brand new race and that they sent safety pins out with the race pack, but I had a feeling that it was going to be a lovely one. In fact, how can a place called Port Sunlight be anything but lovely? 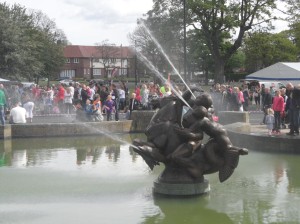 The soft mist of spray on the breeze was very welcome

Port Sunlight was built by Mr Lever (of Lever Brothers fame) for the workers at the Sunlight soap factory. What makes it wonderful is that he commissioned thirty different architects to design the houses, meaning that there is an incredible mix of styles of housing – in fact the village has an amazing 900 listed buildings within its 130 acres. This was always going to be a bit different  to running along Blackpool front.

It’s a bit posh round here

When my safety pin filled race pack arrived, the first thing that I did was look at the course. The second thing that I did was start panicking that I was going to get lost. It’s a two lap race that goes round the village in a sort of complicated figure of eight – I tried to trace the route by following the arrows on the map, but kept ending up at the start point without going around the top half of the eight. Sensible logic told me that (a) there would be marshalls and (b) it was highly unlikely that I would find myself at the front of the pack yelling “tally ho chaps, follow me….”.

Even though my training continues to be unfocused and erratic, my enthusiasm for the race had me convinced that I could pull a decent performance out of the bag. It turned out that whilst a positive mental attitude is important on raceday, it cannot replace sweaty hard work out on the pavements. Whether it was a bit of sunshine, thinking too hard about what I was doing or a lack of actual training, I did find it hard going and although I was happy with the first half, I slumped between 5 and 6km and found it hard to get going again.

Strictly speaking, this is mostly the queue for the loo rather than, say, the start line

The race itself is very friendly – lots of local runners from the village and lots of people standing outside their houses cheering on people they know. The looped route made it quite spectator friendly and the sight of Ginge popping up when I least expected it was a welcome bonus. My other spectator highlights were a girl playing the spoons and the lady who yelled “come on, no slacking” at me as I shuffled past her front door. The marshalls were plentiful and supportive – on the second loop “this is the last time that you’ll pass these marshalls!” kept me going for a stretch. There was a good mix of club runners (to the chap in full compression gear – I salute you and can only imagine the ‘flub’ sound that would accompany me taking off that amount of tight lycra), mid-level runners, beginners and a bloke who was running proper barefoot. All in all it was a good morning out, even if my time wasn’t the best I’ve ever managed.

My lesson learned is that if I want to get a bit faster, I’ll have to have a bit of focus and as such I am embarking on a plan to shift my arse into gear. Luckily it’s nearly Juneathon… 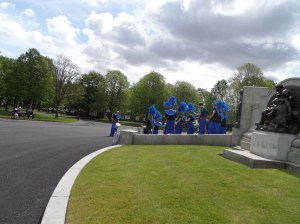 Considering that previously I have declared that I don’t really do races, I seem to have got a bit of a taste for them this year (and it’s not just my Mutley-like love of a medal). This weekend, while 37,500 people were pounding the streets of London Village, I ran the Bolton 10k, despite very nearly weaselling out of it.

I'm glad that I didn't waste a place

Ginge had to work, so his usual cheerleading/photography duties were gamely taken up by Mum, who stood out in the rain and missed The Archers omnibus to support me, a sacrifice that was very much appreciated. 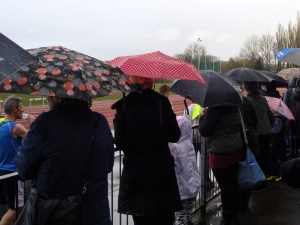 My preparation was much the same as normal, turned up, collected my race number, went to the loo, had the internal conversation where I persuade myself that I really don’t need the loo, skulk around trying to spot people that I think I might finish in front of (basically anyone who has a zimmer frame or is dressed as a pantomime horse).  One day I intend to have a proper routine, stretching and bouncing and the like, but until then I will remain content with simple things like being proud of not falling into the indoor long jump pit…

I don't think that this was a deliberate trap

I watched other people warm up and was rewarded with the sight of chap in tiny running shorts who was doing a remarkable accurate impression of the tennis playing bum scratching lady from the 80s Athena poster. That image will be seared on my retinas for a very long time to come. 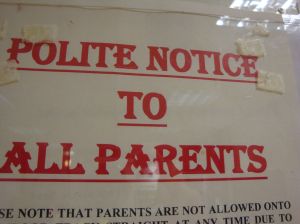 I left Mum finding out the life story and medical history of a chap who was there to support his son, and shuffled my way to the back of the pack.

Since signing up, I’ve been very much aware that this was not going to be a day for a personal best. The course is hilly (well it has a monster of a hill that you run up twice) whereas I prefer my races to be coastal (by coastal, I simply mean flat). On the day, dark looming clouds turned into spells of bucketing rain and the trail sections of the course became muddy and puddled under foot (although all those towpath miles must have come in useful). There was also a bit of a bottleneck as the course dipped down an uneven set of steps and then went across a narrow (single-file) bridge, but I can’t really blame that for my shortcomings. For that I have to look at the fact that my pre-race regime had involved a week mostly knitting in pubs. 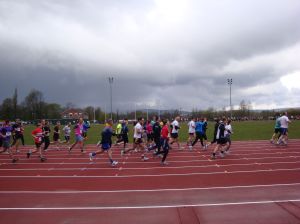 Despite the rain and the mud and the less than brilliant performance, I really enjoyed the race and was glad that I didn’t weasel. I might even try and get some running in before the next one.