So the last post was what happened when I found out. It turns out that my first trimester wasn’t as bad as I feared. Luckily I had no morning sickness, I can’t tell you how grateful I was about that. I work in the community and while I wasn’t too concerned about actually being sick, I was petrified by the social awkwardness of being on a home visit having to excuse myself to go and throw up in the garden. Or worse, not actually getting to the garden…

My symptoms have been a magnified version of the normal, unpregnant me – I’ve been hungry and sleepy. I say sleepy, I cannot express just how knackered I’ve been. The hunger (exacerbated by having to replace the calories I’ve used on a run) has had its moments. I particularly enjoyed the weekend when I went out for lunch with work and hoovered up a massive portion of fishcakes and chips with sticky toffee pudding to finish.

This was followed the day after with a pub tea of where I polished off a steak pudding and then had praise from the bar staff for putting away apple crumble and custard… I am trying to keep an eye on my excesses, I promise. 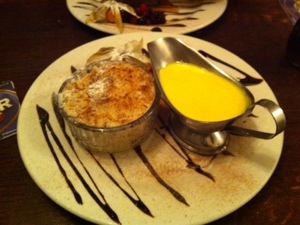 This next bit is my thoughts at the end of my first week of knowing. My midwife appointment was on Friday and I ran the Mad Dog 10k on the Sunday…

On Monday (the night before we found out) I entered the ballot for the Royal Parks Half. I think it was an act of defiance, a way of shaking my fist at the fates, but without going for the ‘pay now’ option (I’m not daft). Today the ballot results were out. Never have I been so pleased to get a race email with the subject “Sorry, it’s bad news”. There will be no squirrel chasing in the park for me this year.

Today was also the day of my first appointment with the midwives. My big question was whether or not I can carry on running. I’d done my reading (including the Royal College of Obstetricians and Gynaecologists guidelines) and knew that it shouldn’t be an issue, but I was all set for a heated discussion or disapproving looks from a non-runner. As it was, she couldn’t have been lovelier and more reassuring (though I didn’t mention the words half marathon), even telling me about a fitness instructor she had looked after who had gone on teaching all the way through her pregnancy, albeit at a lower intensity.

The other thing that I didn’t mention was the seven miler that I’d done before the appointment… It was an odd run. I set off feeling brilliant, but flagged on the hills, occasionally felt like I was shuffling along (even though when I checked with Miles, I was doing a pace that I would be chuffed with at the best of times. Ooops. Note to self, work on pacing) but finished up running and felt splendid afterwards. I carried water, which felt odd on this distance but seemed like the right thing to do. Oh, and I enjoyed the guilt-free spells of walking and the chocolate milk afterwards.

I am still narky about the tea.