So the last post was what happened when I found out. It turns out that my first trimester wasn’t as bad as I feared. Luckily I had no morning sickness, I can’t tell you how grateful I was about that. I work in the community and while I wasn’t too concerned about actually being sick, I was petrified by the social awkwardness of being on a home visit having to excuse myself to go and throw up in the garden. Or worse, not actually getting to the garden…

My symptoms have been a magnified version of the normal, unpregnant me – I’ve been hungry and sleepy. I say sleepy, I cannot express just how knackered I’ve been. The hunger (exacerbated by having to replace the calories I’ve used on a run) has had its moments. I particularly enjoyed the weekend when I went out for lunch with work and hoovered up a massive portion of fishcakes and chips with sticky toffee pudding to finish.

This was followed the day after with a pub tea of where I polished off a steak pudding and then had praise from the bar staff for putting away apple crumble and custard… I am trying to keep an eye on my excesses, I promise.

This next bit is my thoughts at the end of my first week of knowing. My midwife appointment was on Friday and I ran the Mad Dog 10k on the Sunday…

On Monday (the night before we found out) I entered the ballot for the Royal Parks Half. I think it was an act of defiance, a way of shaking my fist at the fates, but without going for the ‘pay now’ option (I’m not daft). Today the ballot results were out. Never have I been so pleased to get a race email with the subject “Sorry, it’s bad news”. There will be no squirrel chasing in the park for me this year.

Today was also the day of my first appointment with the midwives. My big question was whether or not I can carry on running. I’d done my reading (including the Royal College of Obstetricians and Gynaecologists guidelines) and knew that it shouldn’t be an issue, but I was all set for a heated discussion or disapproving looks from a non-runner. As it was, she couldn’t have been lovelier and more reassuring (though I didn’t mention the words half marathon), even telling me about a fitness instructor she had looked after who had gone on teaching all the way through her pregnancy, albeit at a lower intensity.

The other thing that I didn’t mention was the seven miler that I’d done before the appointment… It was an odd run. I set off feeling brilliant, but flagged on the hills, occasionally felt like I was shuffling along (even though when I checked with Miles, I was doing a pace that I would be chuffed with at the best of times. Ooops. Note to self, work on pacing) but finished up running and felt splendid afterwards. I carried water, which felt odd on this distance but seemed like the right thing to do. Oh, and I enjoyed the guilt-free spells of walking and the chocolate milk afterwards.

I am still narky about the tea.

It’s fair to say that I’m getting more nervous about tomorrow’s Royal Parks Half.

Already I have woken up an hour early, insistent that we were catching the 6.10 train. We never catch the 6.10 train. We always catch the 7.10 train, even today when we made the train with only a couple of minutes to spare (although we did have time to admire two teeny black dress and heels walk of shame outfits at the station. If they weren’t from last night, I admire their commitment to early morning weekend glamour).

So I am on the train. That’s the first worry sorted.

I am fairly convinced that I have my race number, safety pins and Miles in my bag. I know I have my trainers. If anything else is missing, I’ve been reliably informed that London has a few shops.

This has reminded me that I have forgotten my oats for the morning.
I hope that my insides aren’t so delicate that they rebel against unfamiliar muesli. I am already nervous about my insides and needing the loo tomorrow.

What else am I nervous about? People. Thousands and thousands of people. 12,449 other people in fact, and one of them is Ian Beale off of the telly. This is the biggest race I have done and the first time I have been penned by predicted time. I’m hoping that I will be both carried along with the excitement and slowed down enough that I don’t set off at a pace that I would be happy with for a 5k.

I am probably worried about lots of things that I haven’t thought of yet and we’re not even past the Midlands. The best advice I have had has come from people who have run previous Royal Parks – admire the scenery, be lifted by the spectators and most of all, enjoy it!

It’s about this time of year that I like to write a post entitled “how not to prepare for a half marathon”. Last year, September’s Folkestone Half was preceded by a tight, grouchy ITB (and accompanying knee pain) which affected my training in July and August. This year, I have adopted an approach that I am calling “reverse tapering”.

How not to prepare for a half marathon 2012

Twang your back sitting on a sofa – this really doesn’t help the preparations in any way, shape or form.

Go on holiday to the other side of the world
Two weeks ago, we flew out to San Francisco. In itself this is a really, really good thing to do and I heartily recommend it, just not three weeks before race day. 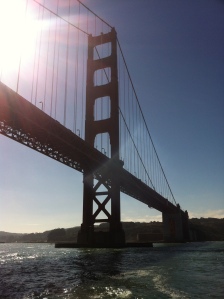 That my friends is a blue sky and sunshine. Every day was like that. We returned home to flood warnings.

San Francisco is rubbish for greedy people. Alright, it’s actually brilliant for greedy people – I am a greedy person and I didn’t meet a meal that I didn’t like while we were away. Despite my concerns that I may have turned into what the cabin crew politely referred to as “one of our broader passengers”, I was relieved to not have to ask for a wider seat on the plane.

Having been lured in by thoughts of running through the Golden Gate Park and along the Embarcadero or joining a running tour, I did take my trainers with me. They seemed to enjoy the trip, but sadly they didn’t get to see any of the city, apparently preferring to remain in my suitcase for the whole week. Ooops. However, we did do lots and lots of walking and if San Francisco has one thing, it’s hills. 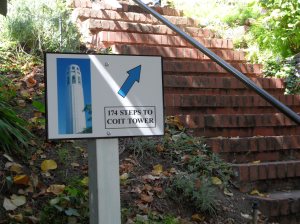 This seemed to offset most of the lard and hopefully did something towards me not losing the fitness that I had acquired previously (albeit a little erratically). Unfortunately, this positive was neuralised by the fact that the flight home/time difference threw out my normally clockwork sleep system meaning that I couldn’t sleep until the early hours and started dozing off at four in the afternoon. Which is a shame because I don’t finish work until five.

Oh and within 24 hours of landing back at Manchester, I had managed to twang my back again. This time getting up from a sofa – if nothing else, I shall be avoiding DFS in the near future. So that was another week of ice, ibuprofen and painful massage using a bouncy ball (don’t ask), but no running.

Finally, with just seven days until the start line I have hauled myself out for a not brilliant 10 miler (I was completed under-fuelled, so I have been carb-loading ever since. Mostly on Tunnocks caramel wafers admittedly, but the thought is there) and did a giddy 3 tonight just to remind my legs that they do know how to run.

My most recent Royal Parks Half newsletter was all about fuelling my training with good nutrition and hydration. The main point of this was to encourage us to get used to drinking Lucozade Sport before the big day and I preferred today’s experiential learning entitled “what not to do”.

I warmed up by preparing to bake a batch of not-quite-ANZAC biscuits, which I suspect don’t have quite the nutritional value that I should be aiming for. It was probably a good thing that I couldn’t finish making these before I went out (a lack of dessiciated coconut in the baking cupboard) otherwise I might have replaced ‘running’ with ‘scoffing’ as my morning’s activity.

To clarify, occasionally I do bake something that isn’t make of butter, oats and syrup. Occasionally.

What today taught me is that a pre-hydration session on the Black Sheep whilst watching the rugby is ill-thought out preparation for a long run. To force myself out of the door today, I’d left my car at mum’s and planned an indirect route that I could round up to make 8 miles (rather than the 5.5 miles it usually measures). With hindsight, I should have stuck to the shorter version because I was flagging by mile 5 and run-walking half a mile later. With hindsight I probably shouldn’t have chosen the day before a long run to do my first weights session back at the gym and with hindsight my mileage this weekend has been pathetic so this was never going to be a roaring success.

Ah well, despite all this I quite enjoyed myself. Since the end of June, I’ve been running without music on my short runs, but can’t even contemplate a long run without something to distract me a little. Rather than tunes, I like using the longer runs to listen to the spoken word and am indulging in the wonderful Desert Island Discs archive (today was David Tennant and John Bishop) as well as trying to boost my IQ with the Infinite Monkey Cage and More or Less podcasts. As well as the pleasure of basking in the dulcet tones of Mr Tennant (no offence to John Bishop), I spied quite a lot of cyclists (including a team taking a break on their way from John O’Groats to Lands End) which put a smile on my face because next week the same route will be taken up by the awesome athleticism of Ironman UK competitors completing their 113 mile bike course. I must make it out to peer at them this year.