I cannot begin to explain how rubbish my running has been over the last few weeks. If I start by saying that I’ve gone a full seven days since my last outing… I have mostly been defeated by the old triangle of excuses (it’s been dark/cold/wet), I have been knackered in the morning and ravenous in the evenings and we had a few days off so running took a back seat (while I took a seat in the snug and indulged in both Yorkshire and Lancaster blondes). Also, I have spent the last few days shrouded in a gloomy grey mood that made me question the whole point of me going out running when ultimately both it and I are a bit useless*.

Anyway, the last run I did before my week of laziness/beeriness/gloominess was a lovely one. It wasn’t the fastest, it was all a bit stop/start in places and I have to admit that it didn’t feel particularly easy, but it was completed in daylight (yay!) with frost, crisp blue skies and a low-slung sun. It is the run that I wish I was doing every time I see runners out on gorgeous mornings when I am driving to work.

This was a muddy shortcut with crunchy puddles underfoot. It made me grin. 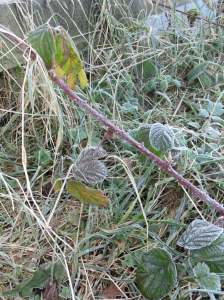 I liked this – it looks a bit alien, but I doubt it is.