I feel that there been a lovely symmetry to this week. On Friday, I finished a spectacular piece of knitting, namely my Scarf of Doom. The Scarf of Doom is the work of graffiti knitter Deadly Knitshade who was invited onto BBC Breakfast to talk about knitting a few weeks ago. She was asked to knit a bright, chunky scarf while she talked, which she did, only for elements of the online knitting community to be hypercritical of, well, pretty much every aspect of her telly appearance. Her response was one of the most graceful, humorous and quite frankly bloody marvellous things that I’ve ever read (you can read the full story here, please do – my summary doesn’t do it justice).

Knitted with two strands of double-knit on 15mm needles. The wool is from my stash (from the top it was bought for a tea cosy, the same tea cosy, pizza bases, various vegetables, flower petals and beaks, grapes/aubergine)

As someone who responds to the question “So what kind of things do you knit?” with some slightly embarrassed foot shuffling and “Um. Dinosaurs. And um, chickens. And peas. And tiny hats. And stuff….”, I was liberated by Deadly Knitshade’s definition of ‘squeeeee knitting’ (it might be made out of scratchy, fluorescent acrylic yarn, but people look at it, want it and go ‘squeeeeee’). In the spirit of solidarity, it seemed only fitting that I should knit a Scarf of Doom. Also, Deadly Knitshade promised a medal for those who made one. As Ginge will testify, I have a Muttley-like love of medals and the lure of something shiny is all that I need to motivate me for a lot of things. 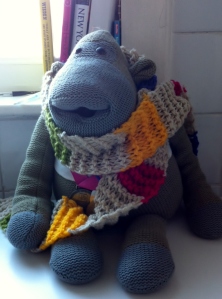 Monkey's disappointment at not getting another medal was soothed by his new scarf.

Sadly there was no medal on offer on Sunday’s Wrap Up and Run 10K in Southport. This was organised by Age UK to raise awareness and funds to help keep older people warm during the winter months. I entered on a whim this Wednesday, when the weather was balmy and spring-like and I couldn’t help but think that maybe Age UK’s campaign was a little mistimed. Ha. The Met Office promised heavy or light rain and temperatures of around 5˚C (which would feel like 1˚C). When we arrived in Southport, there was a bitter wind that chilled the steady drizzle and resulted in me looking spectacularly grumpy (there is photographic evidence of this. I won’t be sharing it with you). 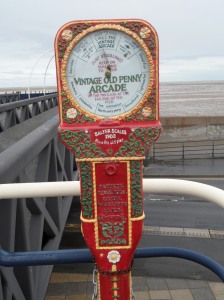 I was cold enough to consider joining in with the warm up. At my only previous race where there has been a pre-race warm up (Liverpool Women’s 10K) I avoided it because it looked like it required far too much coordination for my paltry skills. Today I muttered darkly about not being here to jump up and down, I like running and if I wanted to do jumping, I would go to…jumping practise (I said I was grumpy). My grudging participation was rewarded by the friendliest, most laid back, random warm up (given that the chap who did it didn’t look like the ‘Camilla’ who had previously been introduced, I suspect he was a last minute replacement) that ended up with him accepting heckled exercise suggestions from the crowd. 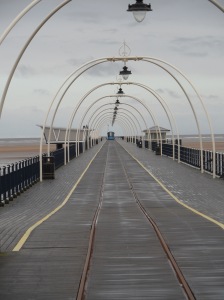 The only downside of the warm up was that I landed slightly awkwardly when we were jumping (typical, it turns out that I need that jumping practise after all) and twanged my ankle. As I lined up at the start, I tried to ignore the fact that it felt like a slight sprain (twelve hours later, I had a dull ache and some slight swelling in my right ankle) and concentrated on the task in hand. I haven’t been following a training plan, in fact my running has been a little erratic of late, so I was intrigued to see how I would get on in my pursuit of a sub-60 10K.

Setting off, I was very,very cold. My feet were numb, my hands were freezing. As we ran along the coastal path into the wind, I really started to doubt my sanity. For those of you who don’t know Southport, it is extremely flat and there is a dearth of tropical palm trees to act as a windbreak from the breezes off the Irish Sea. If I’m honest, there’s a lack of anything to act as a windbreak. If I’m completely honest, there’s usually a lack of sea as well. Anyway, I abandoned being able to consult Miles in favour of pulling my sleeves down over my hands in a pathetic attempt to retain some heat. This led to a breakdown in communication between me and Miles as I managed to press his stop button and didn’t realise for what turned out to be about half a mile (when I realised that I had been running 0.69 miles for ages).

I can only apologise to the poor woman with the lovely knitted ear-warmer who I sidled up to and stalked for a bit so that I could get a proper look. And also the very tall man who ran with his feet turned out and I followed because he looked like a hi-vis emperor penguin. Apart from the soul destroying part at 3K where you could see the marker for 4K just to your right, but had to run around the boating lake to get to, the KMs seemed to pass fairly quickly. I felt strong and comfortable and we didn’t always have to run into the wind. At 8K, I ended up grinning like an idiot at the sight and sound of the drummers who welcomed the runners into the home stretch. My legs, trained to keep my feet to the beat with AudioFuel, took on a life of their own and my pace ramped up to 8.34min/mile as I bounced cheerily past them. 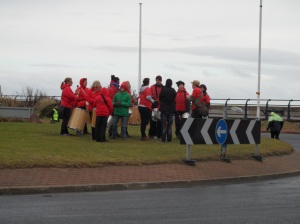 The finish line in sight, I managed a bit of a sprint at the end, collected my water, t-shirt and mars bar, was reunited with a well wrapped up Ginge and risked charges of indecent exposure as I changed tops in the car park. I was very pleased to get cosy with my woolly hat, a flask of tea and my Scarf of Doom and within minutes of arriving home, I’d had a text to confirm my chip time as 1.00.31. All in all, it was a rather good morning.

UPDATE: I forgot to credit Ginge with the Southport photography. He definitely manage to capture the bleakness of the day. Though he didn’t manage to capture me flicking the Vs at him during the bouncy warm up.

Throughout March, there are some more Wrap Up and Run races coming up in Coventry, Exeter, Cheshire and Yorkshire – if Southport is anything to go by, I would heartily recommend them no matter what your running experience.

6 thoughts on “Wrap Up and Run”