After all of the relaxation of the Conwy trip, we had a slightly faster paced break in New York (I know, NYC more lively than Conwy, who’d have thought?) and it left me full of enthusiasm and excitement for (a) Christmas and (b) doing stuff. I often get this after being away (or at work, after being on courses) and love the giddy energy that I have for new projects, until life gets in the way and everything drifts a bit. This time, I was reinvigorated about running after passing a Nike Women advert about not letting the weather beat you and stop you running (which I have since tried to find, but can’t – though this is the image on it). 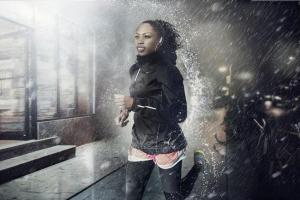 That'll be me that will

“Yeah!” I thought “That’s the kind of runner I want to be”. Then I got back to the UK and it was cold and dark and raining and I didn’t run for 5 days.

Part of the reason that I didn’t run (aside from laziness and an aversion to the cold, dark and rain) is that my hip pain has come back a bit. I fully concede that this is my own fault for neglecting both my foam roller and therapeutic exercises. I tried to run on Saturday but it felt completely wrong, both physically and mentally, and I decided to devote Sunday to some serious rolling, leg waving and thera-banding instead.

On Monday I was faced with the choice of running early in the cold/dark/rain or running late in the cold/dark/rain. I opted for the early one (knowing I would be very short of time in the evening) and was rewarded with one of the worst night’s sleep that I’ve ever had. There is something soul destroying about still being awake at two in the morning, knowing that you can only have a maximum of three hours sleep before the alarm will sound for running. Needless to say, when the alarm did go off (after I had eventually drifted off only to be woken at three by the sound of hailstones the size of golfballs) I chose to ignore it and did some more hip therapy in the evening.

I finally ran this morning when I bounced out of bed at 5.30, was out of the door by 5.50, enjoyed my run, barely got rained on and managed a casual three miles (barely taking any notice of Miles) at under 10 minutes/mile, which I was incredibly pleased with. My pace has gone to pot since my hip started (back in June I was managing 9 minute miles) and that’s going to be one of the things that I inded to address over the next few weeks.

I am going to need some kind of focus because the wave of holiday enthusiasm also carried me to the realisation that if I want to do a spring half marathon, I will need to find one, enter it and train for it. I had a choice of three in the North West in March; Blackpool, Liverpool or Wilmslow. First to be discounted was Blackpool; I liked the 10k in Blackpool, but I’m not sure that I’d fancy doing twice the distance down the sea front in early March. The toss up between Liverpool or Wilmslow was put to Twitter, whereupon Twitter told me that they’re both good, flat, PB achieving races that I would definitely enjoy. From my own musing, I was concerned that I wouldn’t be posh enough for Wilmslow and that there wouldn’t be enough to occupy Ginge while I run round for a couple of hours, but I was still open to either of them.

Then I read the small print of Wilmslow’s information. My panic button had been triggered by the strapline “A race…not a run” on the bottom of the entry form and a bit more reading lead to the discovery that the course has a time limit of 2 hours 35 minutes. Now, I ran Folkestone in 2.33 with injury afflicted training and in stupidly hot conditions. I would hope (and expect) that I would finish under 2.30 next time. I was heartened by the confidence that other people have in my ability to run and enjoy this race. I was also intrigued by what happened to anyone still running after 2:35. Suggestions varied from disappointed head shaking by peers to being mown down by a combine harvester. Liverpool it is then.