Basically, I am in love with New York. We’ve come back from a week’s holiday in the city and it was absolutely amazing in any number of ways – the touristy things, the energy, the wool, the creativity, the food, the running – rather than try to cram all of this into one epic post, I might witter across several. You lucky lucky people.

Seeing as this is supposed to be a running blog, I may as well start with the running. Before we set off, I had good intentions to use the hotel gym in an attempt to ward off the effects of the food mountain that inevitably would be consumed. I gave up on that plan before we even set off and just packed one lot of running kit and my trusty Garmin. In the event, I was either too busy or too asleep to even consider the treadmill. Although I spent 6 days not running, we spent 7 days doing a lot of walking. It’s a bit of a cliché that walking is the best way to see a city, but in this case it’s definitely true.

Things you see when you walk places

While we we ambled around, I mused on the runners that we saw and developed my usual city running jealousy. I’ve written before about this, but basically I see people running in cities and conjure up a fantasy life for myself where I too am a city runner. In this daydream I am a foot taller, two stone lighter, I bound like a gazelle and my glossy, swishy hair bounces with each not over-pronating step. I have an exciting career that gives me lunch break that isn’t half an hour of not dropping too much food into my keyboard (and I wouldn’t be the sort of woman who drops gravy down my front. Having said that, I probably wouldn’t be the sort of woman who eats gravy and that would be rubbish). 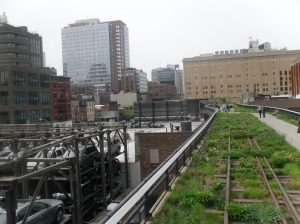 Anyway, after a few days I was becoming a bit intimidated by all  the alpha runners, especially as the female running kit of choice seemed to be bra top and tiny shorts (I’m certain that some of the tops were smaller than my actual sports bra). I was also having difficulty walking as the combination of walking miles, wearing too flat shoes, having gammy feet at the best of times and then doing all of the above in soaking wet shoes and socks had left me with blisters on blisters. Would I actually get to do my run in Central Park? Of course I bloody would, I wouldn’t have missed it for the world.

Walking the Brooklyn Bridge after new shoes, plasters and foot cushioning had been purchased.

We eventually got round to it on the penultimate day, which was pretty much perfect – a sunny Sunday morning in the park. We caught the subway in our running kit, mooched across to the park and decided to head for a lap around the running track at the reservoir. The map we had bought warned us that there were rules about how to run legally around the park (clockwise, or possibly anticlockwise, on the inside, or possibly the outside, of the path) and this had made me a bit anxious that we would do something wrong and someone would shout at us (I live in fear of being shouted at by authoritative people). This is how we found ourselves setting off and following a perky lady who looked like she knew where she was going, unfortunately it turned out that she was going home and we were stalking her out of the park…. Back on track, we realised that there were lots of runners who were all doing their own thing and we headed up to the reservoir. 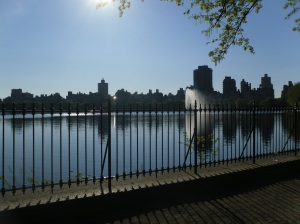 I was reassured that there were a lot more normal runners out at the weekend, in fact there were runners of all shapes, sizes, ages and speeds. My favourite was a girl running wearing barefoot running shoes who was running with jazz hands and the same gait as a small girl riding an imaginary pony. It was fantastic being part of all these people doing the same thing, but differently and, for half an hour at least, pretend that I was part of this amazing city. 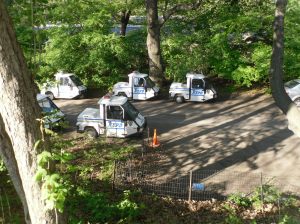 NYPD buggies - after not running for a week and eating food bigger than my head, I was very tempted to ask if I could borrow one instead of running back

843 acres of green loveliness in the middle of the city

5 thoughts on “What I did on my holidays part one: New York running”