This morning’s run was delayed for a bit as I peered out of the window and tried to decide whether I should trust the blue patches of the sky or be suspicious of the much larger areas of dark grey cloud. I erred on the side of caution and put my jacket on, only to spend some of my run squinting and wishing that I’d worn sunglasses (if only to protect my eyes from flying debris and flailing branches – it was incredibly windy out there). The run was largely uneventful; I did my good deed for the day by moving a branch out of the road, I saw some cows, said hello to two cyclists and spotted the very sad sight of a dead sheep in a field (if it was just resting, it definitely needs to find a more relaxed way of lying down). The last mile was done with gritted teeth and distraction techniques as the wind wore me down and I just wanted to get home.

One of the distractions was realising with horror that I’d still not posted a review of the sunglasses that I received ages ago (I’m sorry lovely Laura!), so here we go. 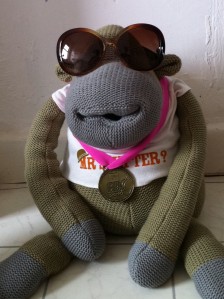 There had been a bit of a mix up with the style of glasses and I had been sent these (modelled beautifully above by Monkey), which are lovely if you like that kind of thing, but a bit rubbish for running. After the swap had been arranged, I collected them from the nice men at Royal Mail and opened them up… My initial thought was, “Oooh, these are Ladies’ Glasses” because they were small and pink. I’ve since looked on the Polaroid website and discovered that they are actually red and feature on both the women’s and men’s sections (I assume that if they were actually pink, they would be called a manly word for pink. Like ‘steak’.)

The first wear of them was actually driving home from the post office in the low afternoon sun (giving you some idea of how long I’ve had them) and the Polaroid lenses were excellent at reducing the glare and I felt a lot more comfortable with hurtling the car round some winding country lanes. Full marks for driving, but what about running?

The first time that I wore them to run in was on the Parbold to Burscough leg of my canal running (giving you a precise idea of how long I’ve had them…) and I have to admit that initially I wasn’t entirely convinced them. Although they were a comfy fit (they felt a bit smaller than the pair that I reviewed last year), I was able to see the bottom half of the frame, which I found a bit disconcerting, and they weren’t as light as my other pair. When we reached the half way bridge, we had a bit of a sit down and Ginge had a play with them. Being the brains of the operation, he realised that the arms are actually adjustable so you can change the angle at which they sit on your nose. Bingo! Loads more comfortable. 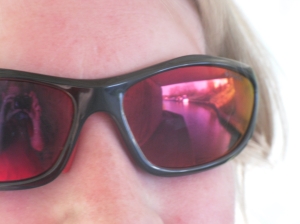 These suited the size of my head (relatively small, since you ask) and I think that they don’t make me look too ridiculous (it’s all I ask for these days, especially when running). Overall, there was no glare, no fogging (despite me sweating even more than usual) and the adjustable arms mean that if you push one arm up and one arm down, you can run and do Eric Morecambe impressions at the same time, which is a vastly underrated feature of sunglasses.