I’ve been neglecting my blog for a variety of reasons, not least the fact that MiniGinge stood on the laptop and I have been without the Z, X and spacebar (which is more annoying than you would think). Anyway, due to popular demand (hello sis), I have dusted things off to write about this weekend’s Bluebell 10K. 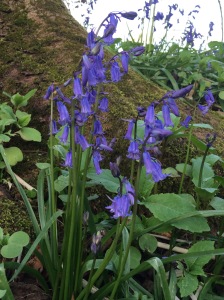 Since January I’ve been trying to find a race that floats my boat, but have struggled with logistics and a general feeling of “meh”. I’m not sure if I’ve not been motivated because I haven’t got a race to aim for, or if I’ve not been able to find a race because I’ve not been motivated. However, a bit of a twitter chat with the lovely @RunningGaynor drew my attention to the Bluebell 10K. A trail run, less than 2 miles from home, with the prospect of a near drowning attempting to cross a river without the aid of a bridge. It seemed to good an offer to turn down.

So I signed up. And then ignored the fact that I had signed up until the night before the race. I was driving home in the sunshine and thought “yeah, I’ll do it, it’ll be great”. And then I looked at the weather for the next day. Sunshine did not feature. At all. But still, I was going to get wet anyway so what the hell (just to be clear, I took the photos on a return trip in much nicer weather – I had a fear of taking technology through a river). 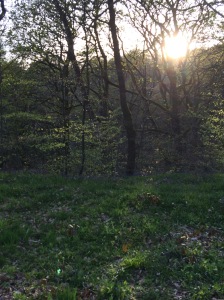 I arrived in plenty of time to collect my race number and, despite going to the loo a million times before setting off, joined the toilet queue. And queued. And queued. And queued. It was a bit like waiting for a theme park ride – ever so often someone would pass you and comment “oh, I was waiting for another 20 minutes from there”. It turns out that the pub that acted as HQ had withdrawn access to the main part of the pub 48 hours before the race. This left us with access to one toilet. For everyone. With less than ten minutes to go, we were asked to go to the start and I put a lot of trust in the hope that my brain was actually shouting louder than my bladder (I relied heavily on the fact that when I set off on my marathon, I was convinced that I would need the loo at the end of the first lap. I ended up running for 5 and a half hours before needing to stop).

The toilet queue had given me lots of opportunity to marvel at/become fearful of the number of running club vests and hoodies at the race. This sight is guaranteed to fill me with fear as I am convinced that I will be lumbering along at the back behind this herd of speedy gazelles. As a result, I tend to hide from races that are dominated by club runners. 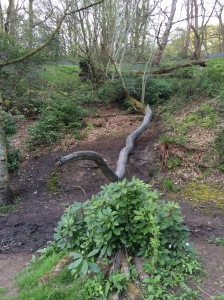 The course itself was a squelchy, slippy mudbath interspersed with steps, stiles and slopes that required a little of bit of hanging onto branches to get up and down at some points. I soon realised that the more tentatively you approach these things, the more likely you are to end up on your bum. It didn’t take long for me to be dismounting bridges with a two-footed jump. This policy only bit me once, when the mud was slightly colder, wetter and deeper than I had expected…Luckily I retained both shoes.

At 4 miles, my calves and shoes were completely covered in mud, but it was ok because I had to run through a river (twice) before the finish. When I first heard about the autumn version of this race a few years ago, I imagined the river crossing to involve some gentle splashing across a rippling, pebbled brook. When I looked at photos, I realised that it was somewhat deeper. When I plunged into the icy water, I was slightly surprised to find the water reached my bum. Sensibly, the race organisers position the photographer at the river in order to capture the look of shock and delight as you wade across to the other bank (this is one race photo that is definitely going to be ordered). 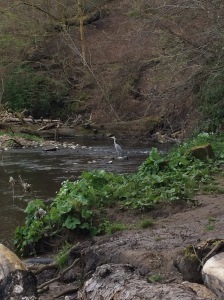 Even though I am normally horrendously clumsy, I managed to cross the river and navigate the mud whilst staying on both feet. Perhaps I got too cocky, but with less than 0.1miles to go, on a flat, dry stretch of path, I caught my foot on a tree root and crashed onto my side. Not embarrassing at all. I picked myself up, shook off my embarrassment and trotted round the next corner to see the finish line, my medal and a rather fetching blue t-shirt.

Despite my last minute tumble, I was grinning. I’d been grinning like an idiot all the way round (I’m going to have to find someone to run with me next year just so that I don’t look quite so strange), I just couldn’t help it. I drove home sitting on a carrier bag (and grinning). I was grinning while I hosed the mud out of the bath after my shower. I was still grinning when Ginge got home from work in the evening. I had just about stopped grinning by the time I went to be. This should give you an idea of how much this race lifted my spirits and left me feeling totally exhilarated (hint: it was quite a lot).

The daft thing is, the start of the race is only a couple of miles from home and the route itself took me less than half a mile from home. Part of the race was along my “zen route” (when I need a run to clear my head and stop to smell the ducks) – it’s where I ran to take in the news that I was pregnant and where I waddled when I was heavily pregnant (and with hindsight, when I was actually in labour). And yet, I am shamefaced to admit that I’ve never run (or walked, or waddled) around the majority of the route (I stick to the flat bits of the valley) and you know what? It’s really lovely, even on a miserable, grey, wet Sunday morning. I am now trying to ride this wave of excitement in order to squash my fears about running a 10k in the other local valley (I finished 3rd from last when I ran it 4 years ago).

One thought on “Spring has sprung – Bluebell 10K”