I forgot to mention that I ran an actual race a few weeks ago. Well, it wasn’t really a competitive kind of affair, but I did get a medal and a goody bag so that makes it a race in my eyes.

The National Trust are keen to get people involved with sport at their properties and organised a series of night races over the winter months. I had originally signed up for one at Lyme Park until I ended up with a rare double booking in my social calendar. I emailed them on the off chance that I could transfer to another race, made a quick phone call to a lovely lady, paid a couple of quid for admin and was re-registered to the last race of the series at Liverpool’s Speke Hall. Rather wonderfully (and I’m sure that someone planned this) the final race was held on the last Saturday of GMT, the last chance to do a relatively early run in the dark.

My post-race enthusiasm hides the fact that I very nearly didn’t go… I’d not run for several weeks, my head was a bit gloomy and my spasm-wrought back had only just been released by the ruthless hands of my therapist. It was also raining. I took the positive step of ordering a torch from Argos with the plan that if I did decide to run, I could nip to pick it up on the way. I was that organised.

The torch was available to collect at 4pm, I needed to set off for the race around 5 so, perhaps inevitably, at around 4.30 in the afternoon, I decided that I would go for it. This was the first race that I have ever gone to on my own and I was more than a little bit nervous. I sat in the car park, fitting the batteries in my new torch and watching all of  the fluorescent-clad, head-torched runners arrive. I texted Ginge to say that it looked like a small race, I was going to be last and it was raining.

As you would expect from a National Trust event, the marshalls were all extremely friendly and helpful, cheerfully guiding us round to where we needed to collect our numbers. In my fear of being late, I had managed to arrive very early and had a bit of an explore. There is actually a maze at the hall, but I didn’t dare go in it for fear of never getting out again.

After sheltering from the rain, we were summoned to the warm up. I hate warm ups  and the following account is not a reflection of the quality of the warm ups (which I’m sure were lovely if you like that kind of thin). The first warm up was run by a local Clubbercise instructor complete with glow sticks. Whilst I quite like dance music, I am rubbish at the actual dancing part (having spent my formative years being more of a shuffling indie disco kind of person) and being on my own, I decided to hide in the hedgerow whilst everyone else stretched and shimmied. The second half was a bit more old school (rather than old skool) but I’m afraid I still didn’t join in. When someone demands that I do something and then tells me to “jog it out”, my natural tendency is to reply, “no thanks, I’ll stay here in my hedge if you don’t mind”.

And halfway through the warm up, I realised that I’d left my Garmin in the car, so I scooted off to get that. The run itself was weird but rather fantastic. After the starting section, there were three laps through woods and field and then a straight run down the road to the finish. Most people were wearing headtorches, but my little handheld one was just fine for me and was pretty essential for navigating some of the more treacherous muddy bits. I ended up following a couple of people and relied on them to know when the three laps were up (I’d probably still be going if it was up to me to keep track). For the first lap we were quite bunched up, but things did thin out a bit. Running on my own, I had moments where I felt like I was the only person in the dark, dark woods, an odd feeling when you’re used to running in well-lit, non-lonely places.

I’m slightly embarrassed to admit that having followed one particular woman all the way around the course, I found a little bit extra in the tank and overtook her on the home straight. And so, to the all important bit, the goody bag (branded drawstring backpack, water bottle) and the bling. 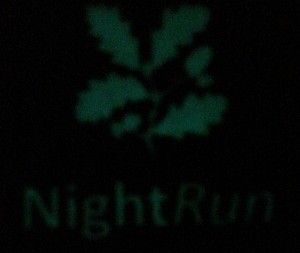 And yes, this was pretty much the entire motivation for running this race.

The Night Run season  has now finished, but it looks very much like it will be repeated next year and I would heartily recommend it to anyone who fancies a friendly, no pressure, family orientated (there’s a shorter route that was run by lots of small people), bit unusal, in the dark race with an amazing medal at the end of it.