Or, “We’ll never get home if we keep standing here staring at a duck on a roof”.

Yesterday’s canal adventure was a bit of an expedition. Having run as far as Cherry Tree the previous week, we decided that the most efficient way to clock up some miles would be to catch the train from Cherry Tree and run back along the canal. Trains from Cherry Tree to Oswaldtwistle are at best infrequent on a Sunday and if we missed the 10.24, the plan was null and void. As such, I woke up at 7.15 with a mild sense of panic and had to resist the urge to force Ginge to get up, dressed and sit in the car so we would be ready. 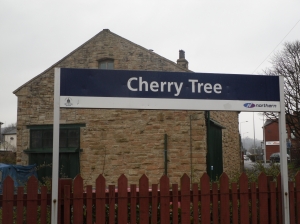 The nice conductor sold us returns as they were cheaper than two singles and I did consider sacking off the running and just catching the train back again, until it was pointed out that we would probably be back home before the next train was due. Once again we had to rely on Ginge’s sense of direction as I had forgotten to remember the route from the station to the canal. Once again, ooops. 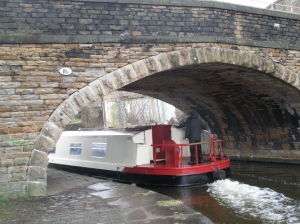 Starting at Bridge 111D (if I was traumatised at starting at an A-bridge last week, I practically had kittens at the thought of a D-bridge) we were to head westwards through Blackburn and back to Cherry Tree, which we reckoned was about 9 miles.

Discarded sofa cropped out of shot on the left

This run took us along the first urban stretch of the canal and it wasn’t the most scenic of starting points. However, on the fence to the right of the picture, there was a beautiful mural of the Leeds & Liverpool canal map painted in the traditional Leeds & Liverpool style and colours. The second photo shows virtually all of the route that we have covered so far, I couldn’t go back any further to get more into the photo as I was already teetering on the grassy edge of the canal and I didn’t fancy a seventies sitcom “back a bit… a bit further…” style of slapstick. 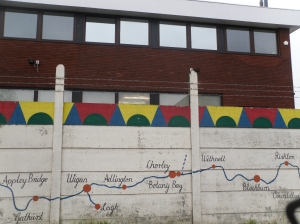 Our completed route so far!

The great thing about running from A to B is that it covers more miles, the downside is that you’ve only got one chance to take photos (on a there and back, I tend to run from A to B and then take photos from B to A. The downside to this is that my memory is rubbish). The first stop we had was mere feet from the start and then again at the milestone that nearly marks the halfway point between Leeds and Liverpool. As we stopped to take this picture, a friendly dog walker asked which one we were aiming for and looked slightly startled as Ginge and I answered “Both of them!” in perky unison.

Nearly stuck in the middle with you

Advertising at its best

…to much more recent signs as we passed over the M65. I marvel at the feat of engineering involved in making a canal cross six lanes of motorway.

Just before Blackburn, we spotted another bit of public art in the form of these gates, which were designed by a local school. 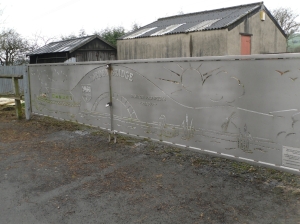 The way into Blackburn was a stark contrast between old and new commerce. One spectacularly tedious section took in a seemingly endless stretch of identikit retail parks, supermarkets and car showrooms, but then we were treated to glimpses of the industry that would have relied on the canal (and that brought the canal through Blackburn in the first place).

The Imperial Mill, Blackburn opened in 1901 and stopped spinning in 1980, its only inhabitant as we passed was a slightly bewildered looking duck, who could see her partner on the water below but couldn’t quite seem to figure out how she got up there, or how to get down. I can’t confirm whether or not she managed to figure this out as I was made to keep running. 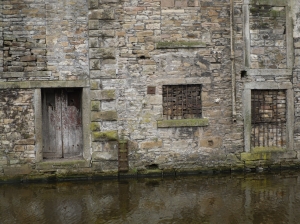 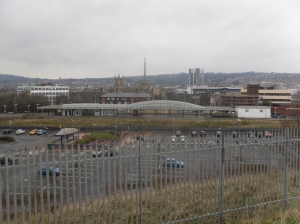 Scenic view of Blackburn train station and beyond

The next bit of public art that we spotted was next to the benches at the look-out point with the view above. I thought that these were amazing (despite a fair bit of graffiti).  The foremost panel shows the Liver bird and the Lancashire rose, the one further back has the hanging fleece of Leeds and the Yorkshire Rose. I’m not entirely sure of the relevance of the diamond and the cross, so if anyone can enlighten me, that would be great.

Public art #3 in a series of 4: Panel things

The next feat of engineering was even more impressive. The Ewood aqueduct may only go over an A-road, but it was buit in 1816, which I think beats the previous one. 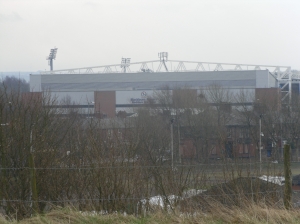 Ewood Park on the left...

...bowling greens on the right

After the aqueduct, we knew that we were on the home stretch back to Bridge 95 at Cherry Tree.

I have to say that I wasn’t particularly looking forward to this run. My map didn’t quite say, “Here be dragons” but Blackburn did come with a warning that some parts of the towpath are locked at night and that “care should always be taken to moor at recognised sites in built-up areas”. I also have to say that this stretch had more graffiti and litter than we’d seen so far (and I can’t find any of British Waterways Towpath Tidies on the L&L), but even on a miserable grey day we saw lots of interesting things and I really enjoyed myself!