Or – From the Familiar to the Unknown.

This is my home stretch of the canal. When I was first starting to run, I did my run/walk sessions with my friend, each week my running creeping up by a minute at a time. Since then, it’s been a favourite of mine for being a mainly flat  3 or 4 miles with lovely scenery and a good chance of spotting some animals. I hadn’t expected to run this as part of the Canal Adventure for a few weeks, but the yesterday’s weather turned out fine and we fancied a route outside the village.

When the Yorkshire based investors proposed the building of the canal, they wanted a route that ran through Whalley to near Colne, however, the Liverpool businessmen disagreed as they thought that the canal should take a longer course via the coalfields of Wigan. The two sides continued to disagree, eventually reaching the compromise of building a link to Wigan. Twenty years passed, during which the canal company had run out of money and the cotton trade had exploded in East Lancashire, making everyone much more keen on the route through Wigan, Chorley and Blackburn. In the meantime, the Lancaster Canal Company had been given permission to build their canal from Chorley to Wigan.  The Leeds-Liverpool Canal Company proposed a parallel route, but eventually common sense and economics saw  the two companies agree to share the southern end of the Lancaster Canal and a series of seven locks was built by the Lancaster Canal Company to link the two waterways. 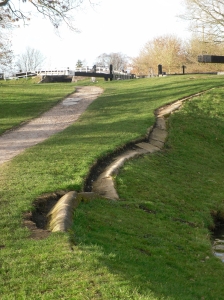 The start of the Hillock

After the Walton Summit bridge, it’s straight into the locks of Johnson’s Hillock. Often I find these to be deceptively tiring and Saturday was one of those days.

Luckily, I had Ginge for company and we plodded on together, both of us having a bit of a sulk that we couldn’t stop off at the CAMRA pub on the way past. 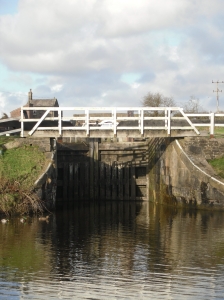 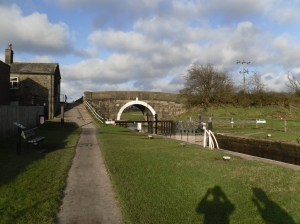 This stretch of the canal provides a bit of education in the form of a guided walk that was designed by Galloway’s Society for the Blind and funded with support from the Lottery Heritage Fund. As part of this, there are a series of three-dimensional panels that explain aspects of the technicalities of the canal. 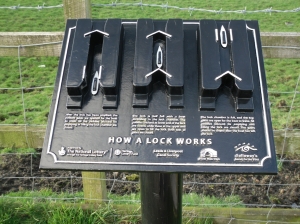 How A Lock Works

After the locks I was hoping to see some lambs, but it’s a bit too early round here and instead we made do with three different breeds of sheep. These were the only ones of which I managed to get some fairly decent pictures, this was despite crouching in the hedgerow trying to take pictures through a fence.  I would like to take this opportunity to reassure the walkers who passed us that I wasn’t having an indiscrete wee, although that was what it looked like. 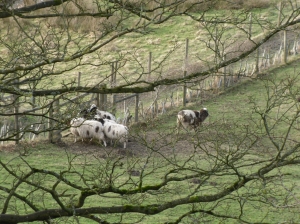 The sheep are about 2 miles from my starting point and usually I turn round here, if not half a mile earlier. In these days of canal miles, 2 miles just doesn’t cut the mustard so we ventured on into completely uncharted territory. It was very, very muddy. I don’t mind running through puddles, but this was squelchy slidey mud that tugs and grabs at your heels.

This was hard work and it didn’t let up until we reached three miles at Bridge 90, where we turned round and ran back through it.