In true occupational therapist stylee, I thought I’d have a proper reflect on Juneathon. Apologies that it’s a bit late, but the limited technology I had didn’t really help matters (sites made of anything more swishy than html make my phone fall over) so I’m afraid that it’s had to wait til we’re back up north to ponder on the whole thing. 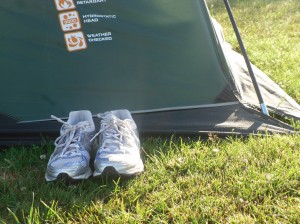 What went well?
Two things get equal billing for being the best part of Juneathon. It was either 7.24 on the 30th when I knew that it was over and I could have a lovely rest (and not upset anyone on the campsite with the sight of my sweaty lycra-clad self) or Saturday morning when I found out that I had been lucky enough to win stuff from the very kind people at  Audiofuel. In all honesty, I was chuffed enough to have completed the task – it was only on day 29 that I was 100% convinced that I could do it.  Juneathon has challenged me and my perception of myself as a runner. I’m not as reluctant a runner as I make out, in fact I’ve rather enjoyed the discipline of going out everyday. 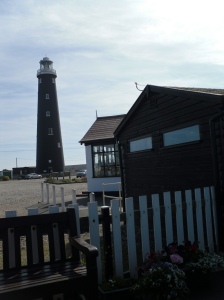 On the last day Juneathon, do not let a loved one persuade you to climb a lighthouse. It is foolish.

I’ve also surprised myself by not getting injured. I’m not the fittest or most well built of people (I click, creak and crunch in various joints and could only be more flat footed if I had flippers), but the only injury that I’ve sustained is a blister on the ball of my right foot. The daft thing is, the blister has nothing to do with Juneathon and everything to do with the ridiculous shoes that I wore to the funeral 3 weeks into Juneathon.

Ah. So that's where I've been going wrong

What didn’t go so well?
One of the worries that I’ve had throughout June is the niggling doubt that I’ve not been doing myself any good. In going out every day, have I been sacrificing both quality and quantity (in terms distance)? I still don’t know the answer to that one, I suspect that time will tell when I start trying to improve quality and quantity.  What I do know is that my Garmin tells me that of the 20th fastest runs it’s recorded since I got it last August, 4 were done last September/October, 15 were during  Juneathon and one was when I sent Ginge out with it to prove that he runs way faster than me.

Footpath signs lead to chaos. Even if the little man on them looks terribly jaunty.

The downside of going on holiday is that I’ve had limited access to other people’s updates and haven’t been able to comment on things as often as I’d have liked to. I was a bit nervous when I saw how big Juneathon was this year, but once again it’s been fantastic to read about other people’s adventures and to have support and encouragement from Proper Runners, many of whom I remain in awe of (I was blushing for days after being name-checked by I Run Because I Love Food). I think I realised how much I valued you all was when my rationed internet access meant that I had the choice of looking at facebook or looking at blogs, and  it was Juneathon what won it.

So how will this affect my running?

At a basic level, the week in Kent has taught me the value of running in new places and without music.  My excuses for not running are also looking flimsier (Not enough time/Need a ‘rest day’/Wrong weather/On holiday…). Most importantly, I know that I can do more than I’ve given myself credit for. If I take the discipline of Juneathon and apply it to a more focussed training plan, what could happen? What definitely needs to happen is that I need to be more controlled about my pace. Most of my runs have been 3 miles and I’m tending to set off at a 3mile pace when I should be saving myself for the longer distances (the first half of The Essence of Running’s experience sounds very similar to my issues).

So that’s that – all I need to do now is find a training plan, not ignore it and do my own thing, pace myself nicely and repeat until excellence is achieved.

A huge thank you is due to the unholy trinity of Juneathon – the creator, the protector and the independent adjudicator – for organising this wonderful thing. You’re all fantastic!

Oh, and on the penultimate day of our holiday I did a lovely 6 mile loop through the fields.

Fields. Photo as requested by eirefairy

And so my juneathon finished just as it had started; waking up way before the alarm went off in the fear that I would miss it. Except that now the alarm is a donkey. I lumbered off around the country lanes, eager as ever not to be run over by a tractor and did 3 miles at 10.06min/mile. Kent makes me faster.↲↲ Back at the tent, Ginge was waiting with a hug and a bottle of water, and I lay on my back on the dewy grass watching the clouds. Until that is I totted up my mileage for the month. 99 miles. Can you see where this is going? On went the socks, the trainers and the garmin and off I went to claim my juneathon century. 9 minutes and 13 seconds later, it was well and truly over. 30 days, 31 runs, 100 miles. I’ve proper enjoyed on it and will reflect on it more when I don’t have to poke at a phone with a stick. What I will say is that it’s been a joy reading everyone’s blogs and I’ve really appreciated everyone’s comments on mine. Thank you!

Yesterday I was playing a game of chicken with my phone battery while I was posting. It’s definitely been a bit of a challenge posting while I’ve been in the tent and I’ve been trying to keep up with other people’s juneathons as best I can. It’s also kept down my lengthy whinging about my bee sting (at its peak on Monday it was a 6 inch diameter of red swelling, now its about 3 inches with a hint of yellow bruise).

I know it seems like madness carrying on with juneathon while camping, but to be honest I don’t think I’d be finishing with half as much enthusiasm if I’d been dragging myself out of bed for prework plods sound the village. It’s been lovely running somewhere new and, possibly more importantly, incredibly flat. Kent, oh how I love your lack of inclines! I actually like it so much here that I’ve done some washing so that our neighbours don’t have to witness me in my (barely decent) third reserve running kit.

Today was a 2 mile loop around the farm, resisting the lure of the jaunty footpath signs even though there was a little wooden troll bridge. One day to go…

Bit of a cock up this morning, plan was fine in theory but turned out to be fatally flawed in practice. I ran 6 miles from Dymchurch to Hythe along the sea front, well that was the plan, I actually ran 3 miles then ran/walked the remaining 3. What i hadn’t taken into consideration was that even at half 7, the sun would beat down relentlessly and there would be barely an inch of shade. At the end I met Ginge and stood in the sea up to my knees. God it felt good.

Another early three miles before it gets too hot. Nearly had another wheat view route, but an impulsive left turn took me nearer to civilisation. I saw a cyclist and a hot air balloon, neither of whom said hello. This morning we are going shore fishing, well ginge is fishing, i shall be knitting.